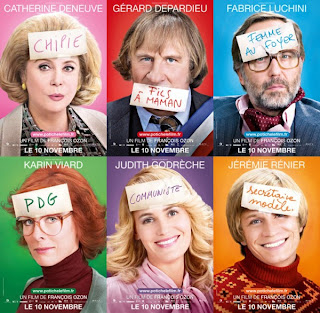 In the beginning of this year, it was released on theaters the French movie “Potiche“. In the US, the movie got the name of “Trophy Wife” and it features the amazing Catherine Deneuve playing the part of a bored submissive housewife in the 70’s who finds herself in the position of running the family business after her husband has a heart attack.

The movie has interesting funny characters (like the secretary/mistress/feminist) and talks about the changes in the women’s role in society in the 70’s. The original soundtrack is great and the wardrobe is just to die for (specially if you, like me, are crazy about vintage clothes). I strongly recommend it.

At the end of the movie, Cahterine Deneuve sings Jean Ferrat’s classic “C’est beau, la vie” and the soundtrack features a duet with Deneuve singing with her former son in law, the brilliant singer/songwriter Benjamin Biolay.