You are at:Home»Covers»Pink Martini (in French) 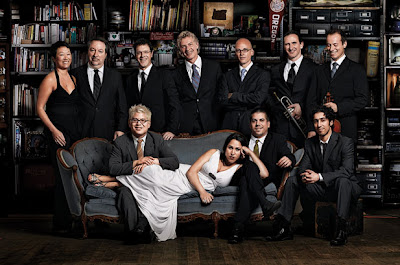 The great American band Pink Martini was born in Portland, Oregon, and has a very interesting proposition. The group describes itself as music archaeologists, and their website lists musical influences that pass through the golden age of Hollywood, Japanese music from the 50’s and the Brazilian Bossa Nova. And apart from their original songs the band also covers songs from all corners of the world, and usually the result is an album with some of the best songs in the world always singing in more than one language. In their seven released albums (one of them being a retrospective), the band has played songs in several languages​​, including Russian, Spanish, Japanese, Italian and French.

In 1997, Pink Martini released their first record and soon made a hit with a song that sounded so nostalgic and great that a lot of people over the internet still thinks it’s an Édith Piaf song (you can find the wrong credits all over Youtube). Sympathique soon made a big hit in all the cool Cafés in the world and I bet every aspiring writer in Starbucks new how to sing “je ne veux pas travailler”.

The band has sang several times in French, including a project with DJ Dimitri from Paris covering the classic Syracuse.